Strings can “die”; tuning pins can become so loose that some strings are unable to hold their pitch.  These strings can be removed but this is often indicative of further problems in the near future.  A more permanent solution is to restring the whole piano.  This is not a cheap option as the following pictures show.  But some pianos are so attractive, and their tone and action so good that it is worth spending the money.

Below is a Waddington piano originally built in 1905. 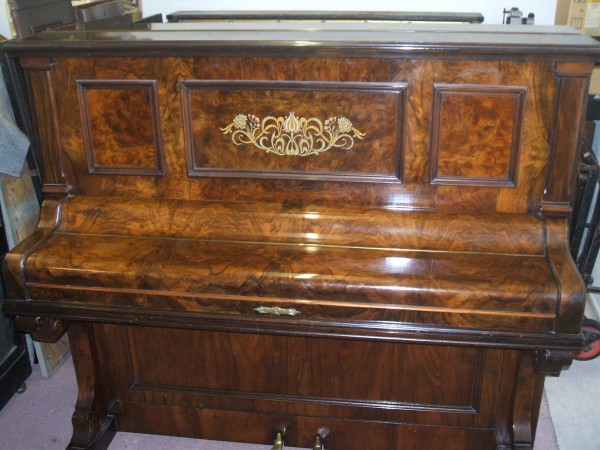 The walnut veneer and marquetry is quite beautiful!  But a few pins were loose and a cracked wrest plank was suspected.  The wrest plank is glued very securely into an upright piano; to remove it whole without destroying the piano is impossible, it has to be chipped out bit by bit!  So to replace it with a new plank is not an undertaking to be taken without being very sure. 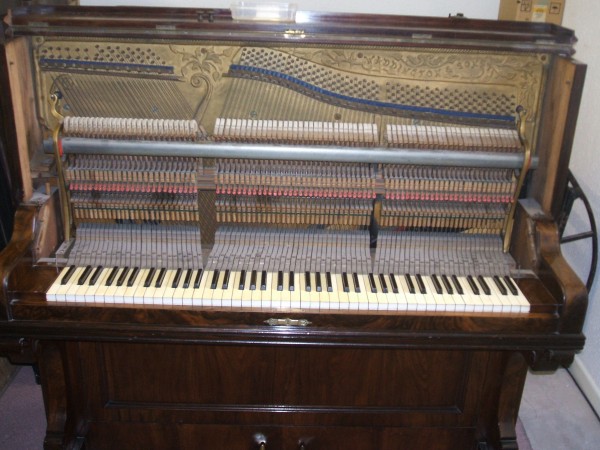 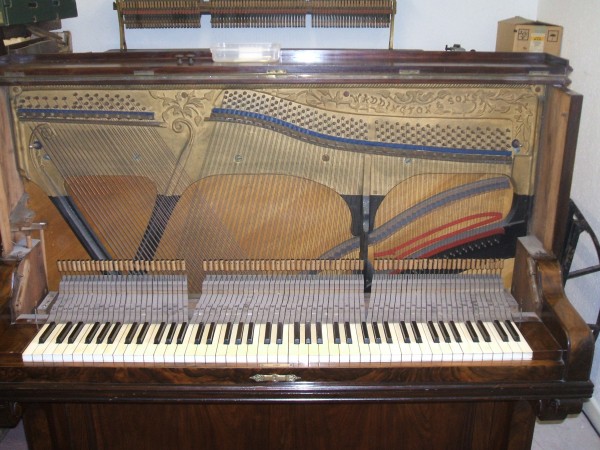 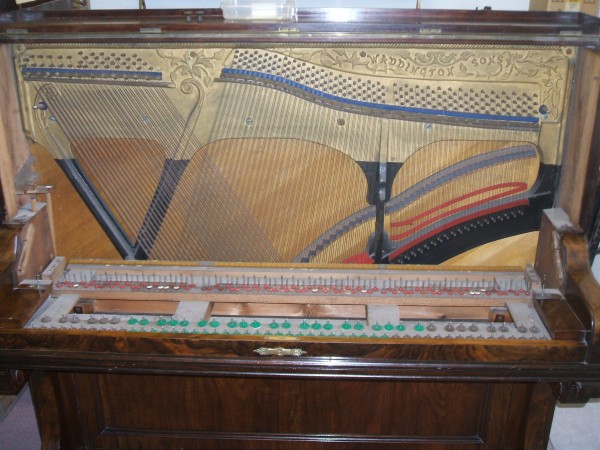 That was the easy part.  One hundred years of dust and dirt is now hoovered out.

Next the screw drivers are needed.   The piano is put on its back and the legs removed so that the screws holding the keybed are revealed:

This can now be removed:

After taking careful measurements of all the treble strings, and a rubbing of the base strings they can be carefully removed: 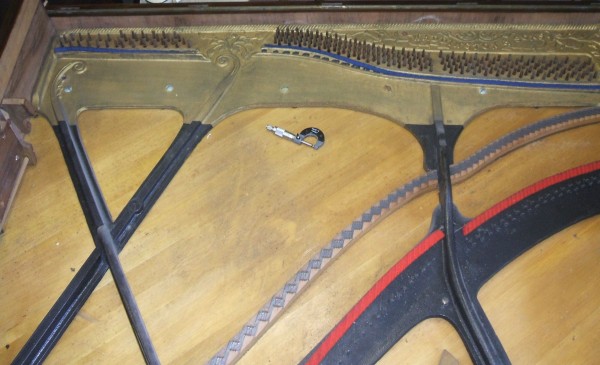 This leaves the tuning pins free to be investigated.  Using a torque meter the force needed to turn each pin is measured and recorded on a spreadsheet: 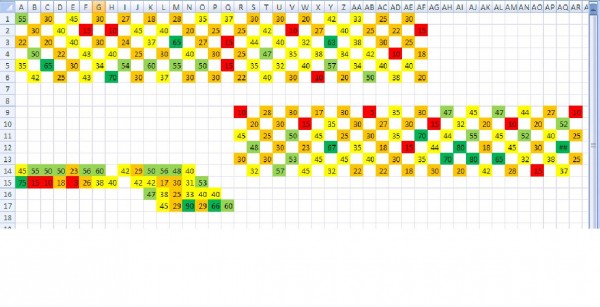 It is readily seen that the loosest pins are randomly scattered across the wrest plank, as are the tightest pins, so a crack in the plank is unlikely and the most probable cause is simply a general aging of the plank.  The best solution is to simply restring the piano with larger tuning pins.

Next, remove the old pins: 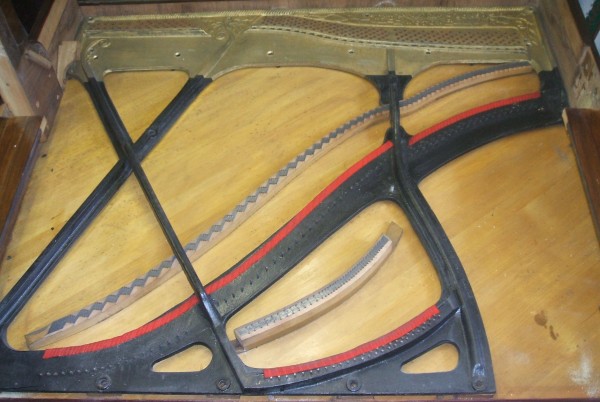 In order to clean up the soundboard, the frame is then lifted out: 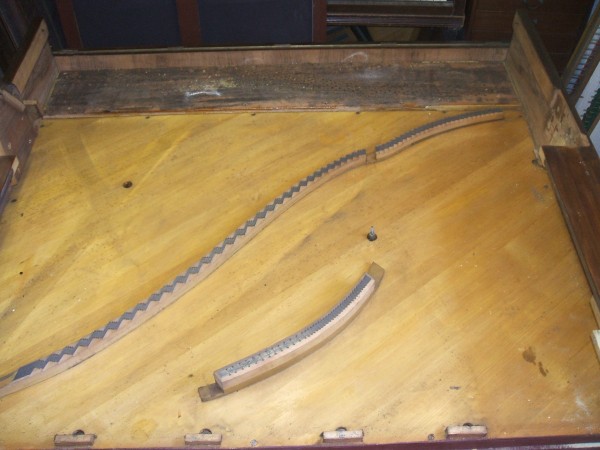 That done, and the frame cleaned and given a fresh coat of gold, the frame is reinstalled: 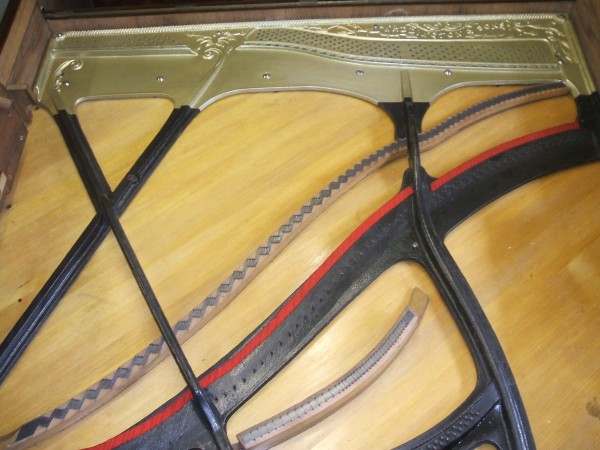 The piano is then strung and the action reinstalled.  The base strings were made to order: 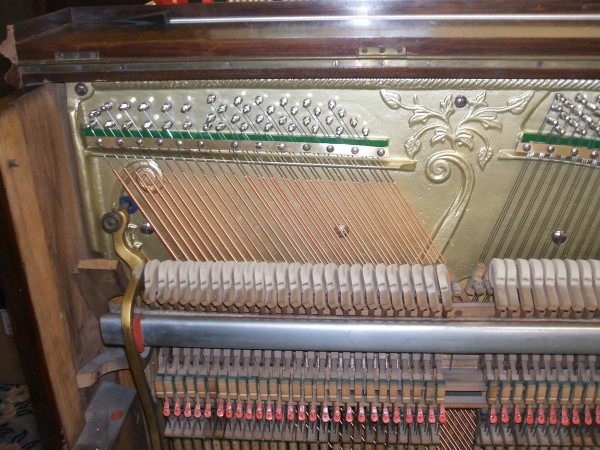 The treble strings are carefully graded in diameter from the shortest to the longest: 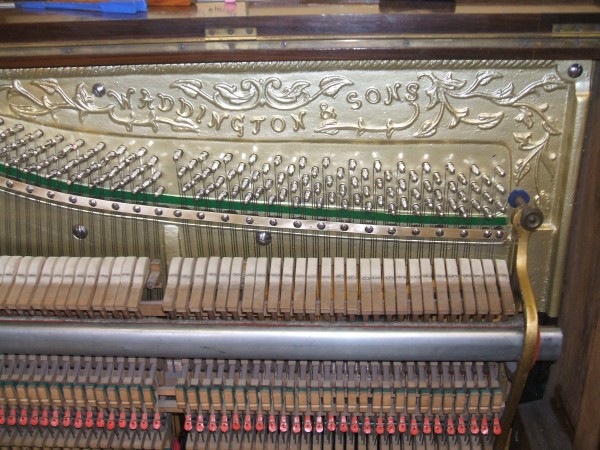 The hammers are then realigned to the strings, some regulation done to the action and, after being tuned several times as the new strings stretch, it is ready to go home. 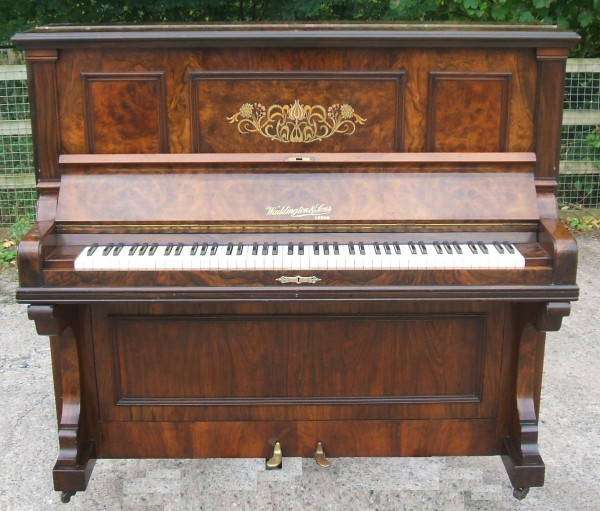